After a lengthy hiatus while waiting for that second jab to kick in over the summer, Craig and I reunited to double team the lunch buffet at An Indian Affair Restaurant in Langley. It was a last-minute adventure so I’d already filled up on a big breakfast just hours earlier, but once I smelled the enticing aromas permeating the parking lot at An Indian Affair my appetite immediately returned.

The interior was rather ritzy for Langley with a gorgeous and modern vibe. The lighting was especially ornate and I would love to come back at night to see it in all its full glory. Even An Indian Affair’s Google maps entry points to luxury with their name appearing in italicized script. Fancy af.

We were welcomed by the friendly wait staff with a fresh basket of hot buttered naan. This was included within the reasonable buffet price of $15.49 and seemed to be bottomless as they refilled later in the meal. Round two was even softer and fluffier but we took care not to fill up on bread as there was a feast to be had…

I started at the appy area and loaded up with (clockwise from left) some fried strips of matter which I topped with tamarind sauce, mint chutney, and raita, a chickpea salad, papadam, channa masala, onion bhaji, bread pakora, and a spoonful of aloo mutter in the center.

The fried strips of matter were crispy and with its relative lack of flavour was a perfect way to sample the various sauces. I like these wet/dry combo Indian snacks so this was one of my faves. The mango chutney on the side was sweet and chunky, just the way my old British landlord used to make for us as a kid. He had spent a lot of time in India and was a proficient chef who often invited us up for dinner, so certain Indian dishes churn up nostalgia for simpler times, this being one of them.

The chickpea salad was spicy but surprisingly refreshing due in part to copious amounts of cilantro and slivers of beet. The papadam was plain and suitably crispy. Try crumbling it up and putting it in with one of the mushier dishes for a soup and soda crackers-like experience. It works well with the channa masala or aloo mutter, both of which are competent versions of old favourites.

These two stars needed to shine on their own. An Indian Affair’s Bread Pakora is served up sandwich style with a chilli-flecked potato filling akin to a samosa. With a light and crispy batter, the pakora sandwich was delicious on its own or drizzled with chutney and tamarind. Another addictive one that would be easy to fill up on for those with lesser appetites.

The Onion Bhaji was a perfect blend of soft onions and crispier bits, plus the light crunch of the golden batter. I could eat these for days! Both of the above dishes were among the best I’ve had of each.

He had mumbled something to our server about a peck of pickled peppers and wound up with a side of jalapenos when what he really was trying to convey was Achar, a side of pickled vegetables that in this case includes lemon, mango, carrot and chilli peppers. They brought a replacement and let us keep the jalapenos free of charge, but we both found the achar (and the raita, above) a tad overly salted. Achar is normally pretty salty for some tastes (mine included), but the raita was a disappointment as we both normally love it.

Craig on the other hand thoroughly enjoyed the Butter Chicken and was pleased that he didn’t have to go wading in the depths of the serving tray to find plenty of healthy nugs. The Veggie Noodles were fried in a tamarind sauce with cabbage, onion, and broccoli. Most of the dishes here were cooked to a people-pleasing medium so be forewarned that this one is the spiciest of the bunch. The Chilli Fish consisted of basa in a red sauce with a sweet surge before the singe. Most palates should have no problem with the spice level of this one.

My second plate kicked off lunch proper and clockwise from rice consisted of Khatte Meethe Baingan, Zucchini Masala, Tandoori Chicken, and Goat Curry, with Raita on the right.

The exotic-sounding and heretofore unknown to me Khatte Meethe Baingan was a mushy eggplant curry that worked as a thick jam for the naan. But watch out for stems! They blend in and can be a bit stabby. The Zucchini Masala was also a mushy veg based curry, and due to the textural overwhelm I’d advise divvying these up between plates if you’re keen to try both.

On to the meats, An Indian Affair’s Tandoori Chicken had more of a charcoal taste than some plaes which I thoroughly enjoyed. I was also appreciative that the meat had retained some moisture as I find tandoori chicken a bit dry sometimes, especially when left to sit for any length in a warming tray. The staff had taken pains to top up the trays regularly though and the curries were flying fast and furious amongst the patrons.

The Goat Curry was runny and bursting with exotic spices with an overall turmeric taste. The meat chunks were small and sporadic but that’s pretty standard for goat based dishes.

Can’t have an Indian lunch buffet without these little golden goodies, the Indian equivalent of Timbits fresh from the oven! An Indian Affair’s Gulab Jamun were moist with honeyed rose water but not sopping wet and we ended up with fresh ones from the kitchen since their buffet warmer had run dry at this point (three plates in, so we had taken our sweet time!). Craig had already tried the buffet ones and said these were much better.

An Indian Affair was love at first bite, a temptuous tryst destined to be repeated. A dinner rendezvous for a romantic date to fully appreciate that mood lighting is definitely on my radar. Til we meet again! 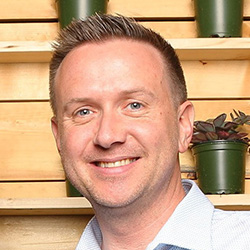